Most of you don’t know me personally. I tend to keep my feelings to myself and I am fairly private about my life. I rather talk about how you are doing rather than let my emotional baggage lay its head on your shoulders. You, reading this blog, may actually have more insight into my life than some of my friends who don’t read this blog. There are few things that make me gushy, teary-eyed, or outright ecstatic. But then, the Olympics come around every two years (or four years if you go back further in my life) and I just can’t control it.

I ball like a baby. I scream like a raving drunk. Tears streak down my face. Fists pump like Arsenio. Find me rooting for every athlete on NBC coverage. Don’t look at me. It’s not pretty.

No, I’ve never had such prowess to even come close to competition at that level, but for some reason, I carry a strong emotional empathy no matter the win or the loss and no matter the athlete. The accomplishment of making the team, being able to compete with the world’s greatest, standing on the podium, following the footsteps of those before—it’s the biggest win. Out of medal contention at a hundredth of a second, making the smallest but biggest mistake, incurring an injury at the most inopportune time—it’s the biggest loss. And all of it is my biggest emotional tidal wave. I. Don’t. Know. Why. It’s just so…

When Sarah, the main character, recalls her moment of discovering true happiness, albeit a brief, possibly only 30-second, bit of the play (see, I’m not giving anything away), I felt like I was watching a heartstring-tugging moment of the Olympics. Oy vey.

Emotionally (and very uncharacteristically) charged from that moment, I felt a need for more happy to fuel the heart. So, I took to the cast and found out their discovered happy moments. 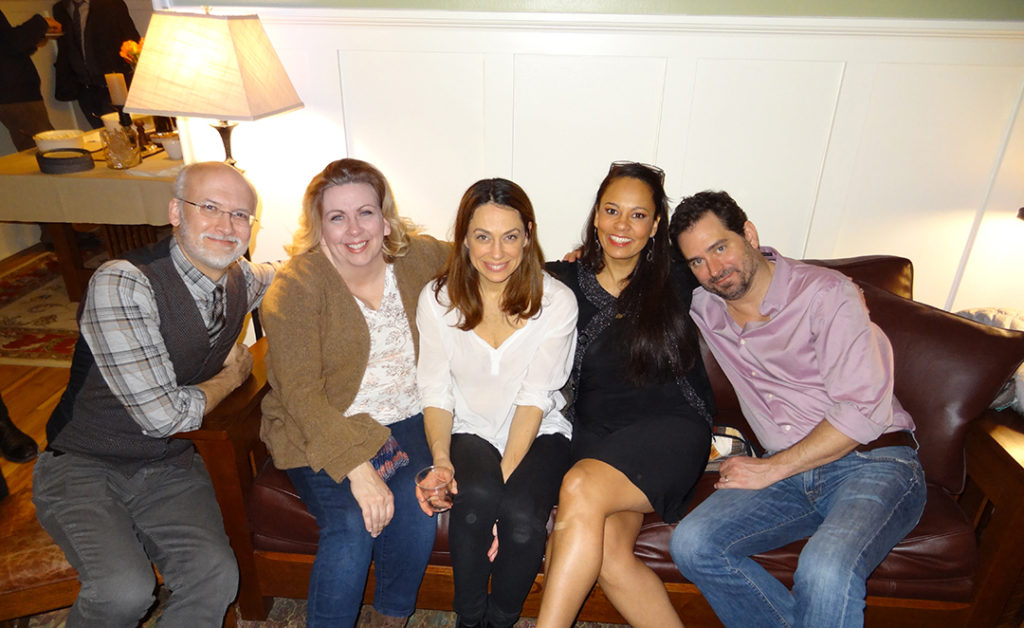 Kathleen McElfresh/SARAH COOPER –
The moment her friend snapped a photo of her on a boat headed to her senior prom.
“We took a boat to senior prom – a little tipsy, with my boyfriend who I was crazy about, and a bunch of friends. I closed my eyes and thought, ‘Yeah, this is happiness.’ My friend took a picture of me. It’s completely what Sarah talks about and I was 18.”

Nafeesa Monroe/BETH DENTON and others –
On the Big Island in Hawaii when she saw Banyan trees.
“The first time I visited Hawaii, the Big Island, and seeing Banyan trees. I felt really connected with Banyan trees. I just want them in my life.” Nafeesa was 16 and traveling with her high school class on an ecology exploration spring break trip.

Todd Gearhart/JAKE BELLAMY –
At camp in the middle of the night with his soon-to-be best friend.
“I was at church camp with my best friend. We were like 12 years old. It was dark. We snuck out of the cabin, up the hill. This is the first conversation I ever really remember having and he said, ‘If you were to die tomorrow and be remembered forever, would you?’ We weren’t best friends yet and I don’t remember what I said but I was like, ‘Wow, no one has ever talked to me like that before.’”

Colleen Baum/VIRGINIA COOPER –
Rowing down the river with friends.
“We were in Stratford-upon-Avon, I was studying theatre there. We stole a rowboat and we fit as many people from our group as we could fit in it. We laughed our butts off all the way down the Avon until they finally asked us to get off the boat and return it.”

Can you recall your discovering-happy moment in life? Share with us in the comments! And be sure to catch /i/ at Pioneer Theatre Company until March 3, 2018. Buy your tickets here. Well, the Olympics are on so, I got to go. Go watch /i/!