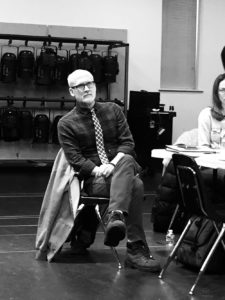 A blog about a play

7. The Secret Sauce & The Chef

Since we’re rushing towards opening night, it seems like a good time to say something important. It’s something that every writer knows to be a we-need-oxygen-to-breathe level fact. It’s true one thousand percent of the time. It’s bedrock. It’s gravity. And here it is.

Actors are the secret sauce.

A weird kind of magic exists in them that often doesn’t make itself completely known until the very end because you weren’t paying close enough attention in the middle while you were busy looking at everything else and they were just standing in front of you, doing magical things that you were missing.

They fix everything. Even things you don’t know need fixing. They make things that shouldn’t work work and words that shouldn’t sing float like Mozart-type notes in the air. They are able to tap a quiet river of emotion inside of them and put it on display for people to see and they do it without missing a step or batting an eye.

This play is very delicate. Its very topic is emotion itself and when writing it I thought, on a page-by-page, line-by-line basis “I have no idea how an actor will do this.” Because the four actors often have to be saying one thing and feeling or thinking something that is the complete opposite. It seemed literally impossible to me.

And these remarkable people do it without breaking a sweat. It makes me speechless and it’s hard to talk about because it is humbling and mysterious and any writer who doesn’t acknowledge it as fact is a writer not worth your time. I know that’s a strong statement, but I think it’s a true one.

And if actors are the sauce that makes the food delicious, designers are the chefs that make it a meal.

Every time you see a play, it is easy to forget that every single thing you see and hear DID NOT EXIST BEFORE SOME MIRACULOUS WIZARDS JUST MADE IT ALL UP OUT OF THIN AIR. All I say at the beginning of this play is that it happens “soon.” I don’t say when. I give little clues throughout as to what I think it might look like, sound like, feel like, but it’s an invisible world on the page.

But after I turned it over to Karen, she gathered this remarkable group of humans to create a physical and aural world for the play. Set. Lights. Costumes. Music. Props. And they made it out of nothing.

I know that seems like the obviousest statement ever, but let me say it again:

If you don’t think that’s amazing, then you should check your thinker.

It’s hard for me to talk about, because it always makes me teary, but it’s the most exciting thing about writing a play. You start alone, and it’s just yours, but person by person—first the director, then the designers, then the actors—it starts to belong to a bigger and bigger group of people. I find it moving in a way so profound I will never find words accurate enough to describe the feeling. And my entire job is finding words. Oh, well. Some feelings are bigger than words, I guess.

And that circle is about to get bigger. One more post to go. You should come back. It’s about somebody you know. See you soon.

Talbott’s i will receive its World Premiere on the PTC stage Feb. 16 – March 3, 2018. Click here for more details.