Home Blog The Lifespan of a…Lie?

What is Two Truths and a Lie? “It’s an icebreaker exercise in which a person shares two facts about themselves that are true and one that is false,” says director Wes Grantom. “This activity has helped us get to know each other as we rehearse.”

So, what better way to get to know the cast than to play “Two Truths and Lie” during the Opening Night Party of The Lifespan of a Fact, directed by Wes Grantom, starring John Kroft (Jim Fingal), Ben Cherry (John D’Agata), and Constance Macy (Emily Penrose). Since the cast has done this exercise so often with their director, Wes, we wanted to mix it up a bit –  so instead of the cast members and Wes guessing each other’s truths and lies, the staff and crew did! 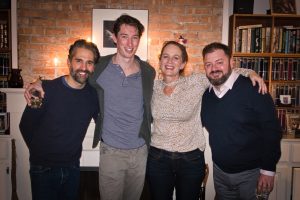 Everyone gathered around the fireplace of Chris Lino (former managing director) and Colleen Lindstrom (former Patron Services Manager)’s home to play the game. Here’s a quickly (and somewhat roughly) edited video of what happened… Or, scroll downwards to see the bare bones transcription of the game in video.

Now that you know the cast so well, see them on stage at the Pioneer Theatre Company! The Lifespan of a Fact runs until November 16, 2019. It is a “true-ish” new play based on the book by John D’Agata and Jim Fingal. It’s also brings to light how important accuracy becomes within literary essays when it comes down to facts.

Find tickets here. And, college students, be sure to take advantage of the discounts offered by PTC here, including a $5 rush.

Two Truths and a Lie –

“The swings throw-up thing is a lie,” says Wes Grantom.

“I do not make them call me by my character,” says Ben Cherry.

“My parents are journalists. Both of them have either been fact-checkers or worked a lot with other fact-checkers,” says John Croft. “He’s father was on 60 Minutes,” says Constance Macy.

“The crime thing… people do sometimes call me Stan sometimes, and I’ve committed some minor crimes… but I think that one is not true… I am not wanted for crimes,” says Constance Macy.