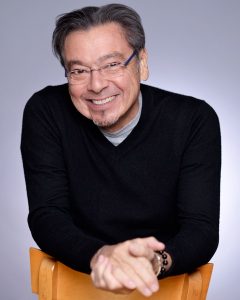 We—Bobby [Creighton], Peter [Colley], Chris [McGovern] and I—had an outline and an empty white board. I picked up a dry marker and asked, “What is this play about?” Pause. Discussion. I wrote on the board: Self-identity v. public-identity.  We spent a rainy week digging into James Cagney’s past, union organizers, last century New York, politics, corny jokes, idol makers, movie stars, the studio system, tap shoes, gangsters, facts, guesses and George M. Cohan.

Provocative… especially when talking about a humble vaudevillian (who shoulda been a boxer) turned world-renowned Oscar winner. Attending this brainstorm (it was raining outside): a gifted actor obsessed with an ambitious idea, an experienced playwright committed to thorough research, a theatre composer devoted to solid structure and true rhymes, and a director/dramaturg specialized in new musicals.

Location? Palm Beach where Lou Tyrell asked us to be part of the 2009 Florida Stage Season. Cagney played to sold out houses and won the Carbonelle Award for Best New Work. Rewrite. On to Drayton (a circuit of seasonal theatres outside of Toronto). New dances (Josh).  Riverside Theatre in Vero Beach, Florida (2010). With each opportunity, we rethought, reimagined, restaged, rewrote, rewrote, rewrote.

I asked Jim Morgan to have a look: Cagney premiered off-Broadway (2015) at the York Theatre. Rewrite. Riki Kane Larimer moved us across town to the West Side Theater (2016); there, we played for 15 months. In 2017: four weeks in Los Angeles (half a mile from Warner Brothers Studios).

For a decade, the audience appreciated, applauded, and awarded our efforts.

Then we dared to consider our idea worthy of the Broadway stage.

Karen Azenberg invited us to Pioneer Theatre Company to explore that notion… our lucky day! Here, we double our cast (from six to twelve), grow our physical production (to suit this formidable stage), and continue to refine (more rewrites!) our uniquely American story of an underdog, patriot, singing-and-dancing, tough guy.

There is no way to measure my gratitude for the many miracles that bring Cagney to Salt Lake City. From rain-soaked Florida to dry-mountained Utah, I heartily exclaim thanks to all our miracle workers!